Next to water, tea is the world’s most popular beverage. It may surprise you to know that all true teas are derived from the Camellia Sinensis plant which hails from Africa and Asia.

Tea was first enjoyed in China as long ago as ten centuries BC. From there, it spread throughout Asia where it was “discovered” by the Portuguese in the 16th century.

Tea became a major trade good, and spread quickly throughout the Western world. Legend has it that it was introduced to the United Kingdom by King Charles II’s Portuguese consort, Catherine of Braganza. By the 1800s, tea drinking was all the rage with the British upper classes.

It didn’t take long for this delightful pastime to spread throughout all levels of English society to become an important aspect of British culture. Today, tea is thought of as the “national beverage” of Britain.​

Black tea is the most processed form of tea. After the leaves are picked they are withered for many hours and then rolled to bring the oils to the surface of the leaves. Following the rolling, is a lengthy oxidation process at temperatures of 90C to 100C. After 80% of the moisture has been removed from the leaves they are thoroughly dried over a wood fire. The end result is a dark brown or black tea.​

The processing of green tea is brief. The leaf withering is done quickly if at all and the leaves are not immediately rolled so there is no oxidation. Following the withering the leaves are fired or pan fried to stop incidental oxidization.

Next the leaves are rolled and further dried. They do not change color during this process and therefore retain their original green colouring hence the name green tea. 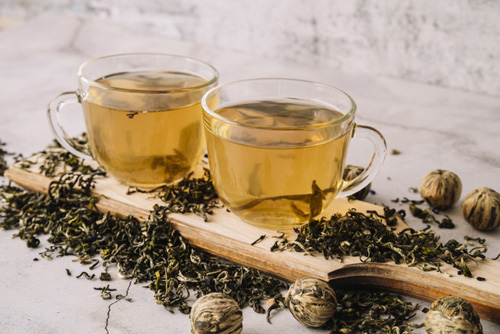 Of the many different types of tea, Matcha is a little peculiar. You won't find matcha leaves—this green tea comes as a stone-ground powder, and is so beloved in Japan that there's a ceremony centered around how to prepare and serve it. If you see green-tea ice cream, that's derived from matcha.

Oolong tea is a slightly darker tea that goes through a full processing consisting of withering and rolling (or shaking). The oxidation process is not as lengthy as that which is used for black tea. When the leaves turn to a reddish-brown around the edges with green remaining in the center, the process is stopped and the leaves are fired. The temperature used for the heating processes for producing Oolong tea are quite high. This results in a very low water content and a stronger flavor than you will find in white or green tea.

White tea is made from young tea leaves with minimal processing. The immature buds and leaves used in this type of tea are identified by very fine silvery white hairs which is the reason for the name.

White tea is neither rolled or fired and is therefore not oxidized. The processing is very minimal as the leaves are spread out and allowed to wither and dry out without any further assistance. The result is a lighter tea with a very delicate flavour.

Herbal tea is not actually tea s it isn't made from the leaves of the Camellia sinensis plant (the tea plant). Instead, herbal tea is made from the leaves, fruits, bark, roots, or flowers belonging to any edible plant. Herbal teas have existed for a very long time, but have surged in popularity over the past several decades thanks to their vibrant flavours and their health benefits whether physical, mental or emotional. Herbal teas can be created from almost any combination of natural ingredients. Some of the most common herbal teas are made using peppermint leaves, chamomile flowers, cinnamon bark, lemongrass pulp, ginger root, lavender flowers and cardamon seeds.

Rooibos is one of the most popular tea alternatives, alternately known as ‘red bush’, the tea originates in South Africa where it has been drunk for centuries. People generally consume the drink in a similar way to black tea; rooibos has an interesting taste, and it is equal measures of fruity, spicy, and nutty. For those sensitive to caffeine, rooibos has the benefit of being caffeine-free. Studies on the drink show some health benefits too. First of all, rooibos contains various phenolic compounds such as flavanones and flavones.