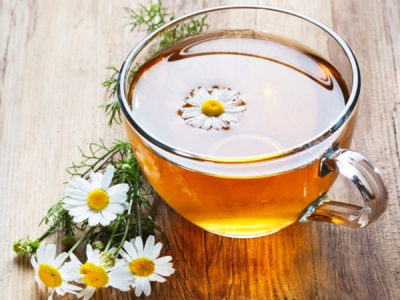 Chamomile is a member of the daisy family whose dried flowers have been used to brew a herbal tea for thousands of years, to treat a range of physical, mental and emotional health issues. Traditional medicine has long used chamomile tea as a simple and healthy way to relieve anxiety and recent scientific studies support this reputation for stress relief and as an effective way to reduce anxiety and mild depression. The essential oil, bisabolol is the active ingredient found in chamomile and has anti-microbial, anti-irritant and anti-inflammatory properties.

So why not sit back, make yourself a warm cup of chamomile tea and let’s explore its many benefits!

Chamomile comes from a Greek word Kamai-melon meaning ‘ground apple’ due to the similarities between the fragrance of chamomile and apple blossom. The history of chamomile dates back at least as far as the ancient Egyptians who used chamomile tea as a medicinal remedy for fevers and colds, for this reason it was valued by the Egyptians above all other herbs and linked with the sun god Ra. Later the Romans enjoyed chamomile tea and used it to treat headaches as well as using the blossom as incense. The Vikings used chamomile to make a hair treatment believing it added volume and lustre to their hair.

The most well know benefit of chamomile relates to its use as a sleep aid and the good news is this isn’t a myth. Chamomile tea acts as a mild sedative providing a mild sedative effect and a natural cure for insomnia and other sleep disorders including restlessness and nightmares.

In addition problems sleeping often add to increased levels of stress and feelings of malaise however chamomile tea can ease these feelings as well.

An excess of free radicals can cause damage to the body’s cellular structure which can turn into chronic diseases including cancer, heart disease, high blood pressure, arthritis and diabetes. Chamomile tea is an excellent source of antioxidants which slow down or prevents the creation of these dangerous free radicals in the body.

Taken regularly antioxidants can also slow or even reverse the visible signs of ageing including wrinkles and skin elasticity which is why chamomile is often used in skin moisturises and anti-aging creams.

If you suffer from period pain chamomile tea can provide a non-chemical, non-drug way to ease the discomfort of menstrual cramps when they occur.

Drinking chamomile tea increases amino acid glycine levels and higher levels act to ease menstrual pay by reducing the frequency and severity of the muscle spasms that case cramps and relaxing the uterus.

Drinking chamomile tea regularly has been shown to help strengthen the body’s immune system and improve white blood cell production in a natural, healthy way. A stronger immune system helps to protect you from a range of health problems like the common cold and the flu.

Research has shown that drinking chamomile tea regularly with meals can greatly reduce glucose levels in blood as well as preventing or improving many of the accompanying side effects of the disease including problems with vision and kidney damage.

Chamomile tea also acts as a preventative treatment for those susceptible to the disease by stopping the progression of hyperglycemia, protecting against the cause of diabetes and encouraging healthy blood vessels and organ growth.

We’ve already shown that chamomile tea has all manner of health benefits when drunk but it can also be used topically on your skin to sooth wounds, sunburn, mosquito bites and bruises as well as skin irritations such as eczema, psoriasis acne and rashes. Research has shown that topical use of chamomile is a more effective treatment in relieving these skin irritations than dermatological creams not to mention vastly cheaper.

Chamomile tea has been valued for thousands of years for its abilities to sooth and heals the body but as with all herbs it’s important to be informed of any potential risks.

If you are allergic to any members of the Asteracae family such as Echinacea, dandelion, chrysanthemum or calendula then you may also be allergic to chamomile. Allergic reactions can present as skin irritation, breathing difficulties or in severe cases anaphylactic shock.

Due to the blood thinning properties present in chamomile you should consult your doctor before any surgery to see if you should stop drinking chamomile.

Asthma sufferers should also speak with their doctor as chamomile tea can aggravate the symptoms.

Interested in learning more about tea? Why not signup to our mailing list and stay up to date with all the latest news, new releases and special offers.